The book charts the story of the Monaco’s celebrated enfant terrible or, as The Sun dubbed her, “the trailer-trash princess”. It begins with the tragedy that proved the turning point in her life: the death of her mother, Grace Kelly, in September 13, 1982 when the car they were in crashed. Badly injured, Stephanie had to clamber out over the unconscious body of her mother, who had suffered a mild stroke at the wheel. She had the presence of mind to put on the Rover 3500’s handbrake and move the automatic shift to park.

For two decades Stephanie has denied persistent rumours that she was the driver. Since the accident, she has lived it up as only a rich, headstrong and some would say disturbed royal can.

She inherited her mother’s powerful sex drive and has had a string of highly-publicised affairs with bad boys like Anthony Delon (convicted of car theft and gun possession) and Jean-Yves Le Feur (imprisoned for fraud and theft), bodyguards and circus artists. This has led to her being diagnosed as a sufferer of the Lady Chatterley syndrome.

Daughter of Prince Rainier and Hollywood ice maiden Grace Kelly, Stephanie’s gilded upbringing was shattered at the age of 17, by the car crash that killed her mother. She survived the accident, but not the conspiracy-mongering of the media that blamed her for her mother’s death. Already known as a ‘wild child’, the tragedy and the vendetta fuelled a vortex of self destruction. The book tells the story of the men, the drugs, the clinics but also the odyssey from riches to rags that have led the princess to a strange serenity. 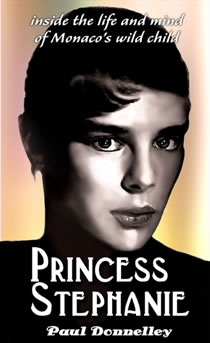