A Degree of Instability: The Oxford Years

Book 4 of Stritcly Private to Public Exposure, a series of memoirs by Alexander Thynn, the Marquis of Bath.

Lord Bath’s public image is that of an indulgent, eccentric, hedonistic, sexual libertine. Strictly Private shows that he is all that but he is also a prolific writer, artist, thinker yet, what is most striking about him is that he has consciously lived his life according to his principles rather than those of his age or kind. Born to a life of privilege, having inherited one of the oldest titles, a fortune and a majestic stately home, he has flouted all the obligatory sexual, social, political conventions in a multitude of ways embracing polygamy, living against the conventional grain while articulating thought-provoking views on society and politics.

Book 4 of Stritcly Private to Public Exposure, a series of memoirs by Alexander Thynn, the Marquis of Bath. 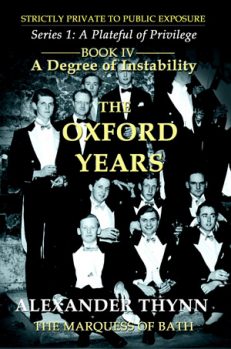 You're viewing: A Degree of Instability: The Oxford Years £16.99
Add to basket